"Wacky Dog, it's not your fault if you wound up in a somersault!" 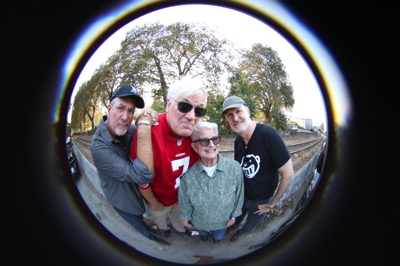 February17th @ the SKYLARK with THE MRS. BILL LARSENS & Charlie Churchill and the Heathens

Another Saturday NIGHT, this time at the legendary BLUE MOON, with the WHITING TENNIS band

Tom Dyer, who runs GREEN MONKEY RECORDS and just completed an epic 3 CD release called "Olympia : The True Story", invited us to follow them on stage at the Rpyal Room after the scheduled band "The Of" had to withdraw at the last minute. It was a great time.

Lucky Liquor, Saturday, November 19, with our pals TENNIS PRO. Eric's very talented former student Alexander Standish , who opened for us at Fogue Gallery, is bringing his pals "YOUR DOWNSTAIRS NEIGHBORS " to open.

Was a most excellent night out.

If you know Helena, it probably won't surprise you to learn she's got a whole other life as a painter. She has a studio, and we played an OUTDOOR HAPPENING in OCTOBER - it was a beautiful afternoon, and our NEW DRUMMER James Lord's first outing. He's remarkable, and we're thrilled to have him on board.

We had the most fabulous time sharing a stage with fellow time travelers from the early 80's RED DRESS !!! Saturday, 8/20/22 at the illustrious Tractor Tavern !

What a great time we had! Such a supportive crowd...thanks sooo much. 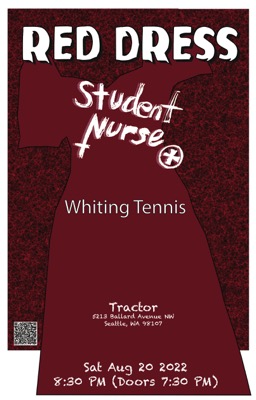 Lyrics to our current set, because Stacy asked for them. :)