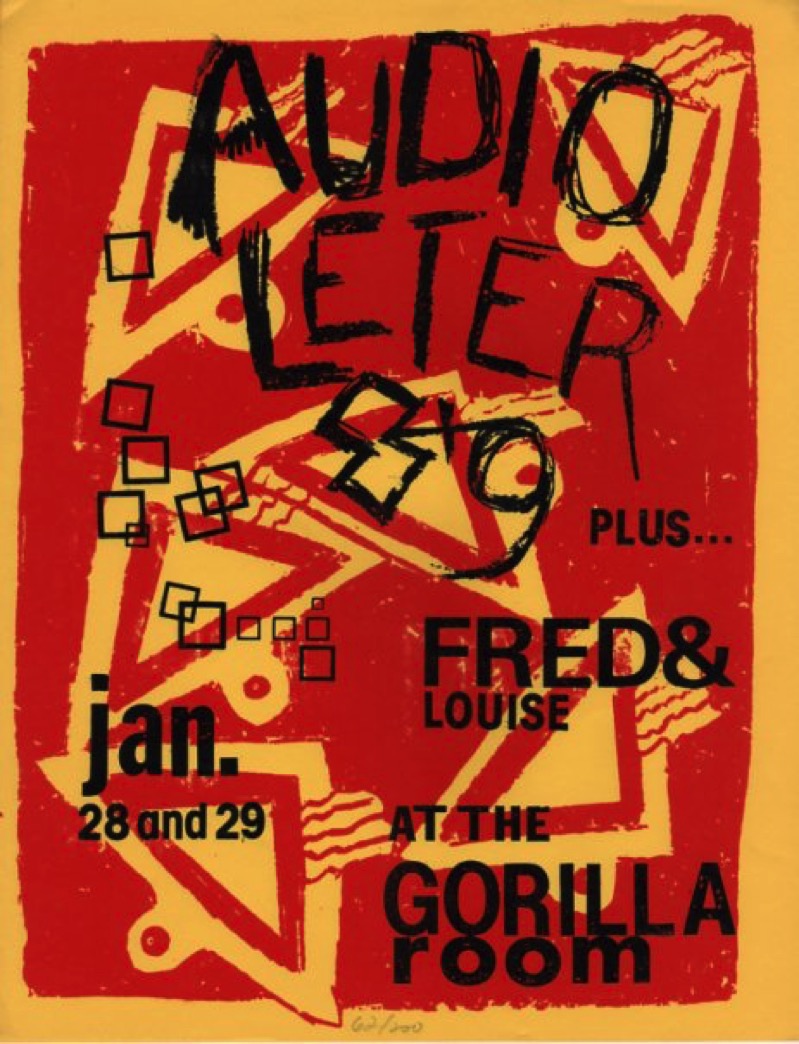 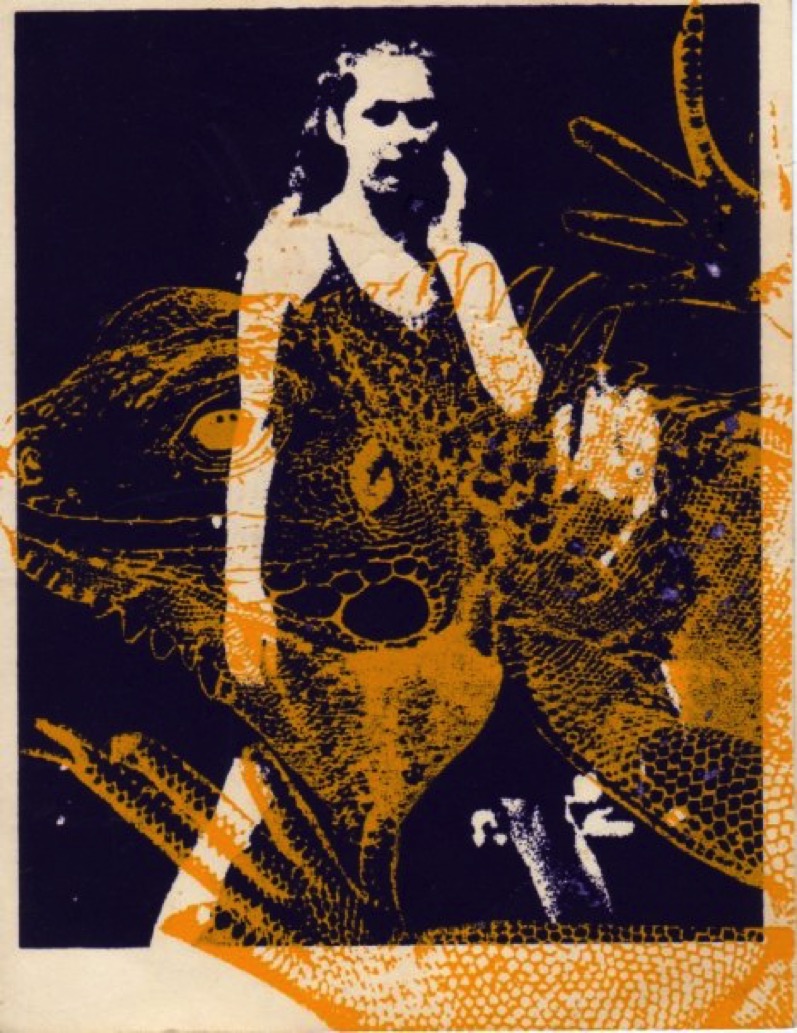 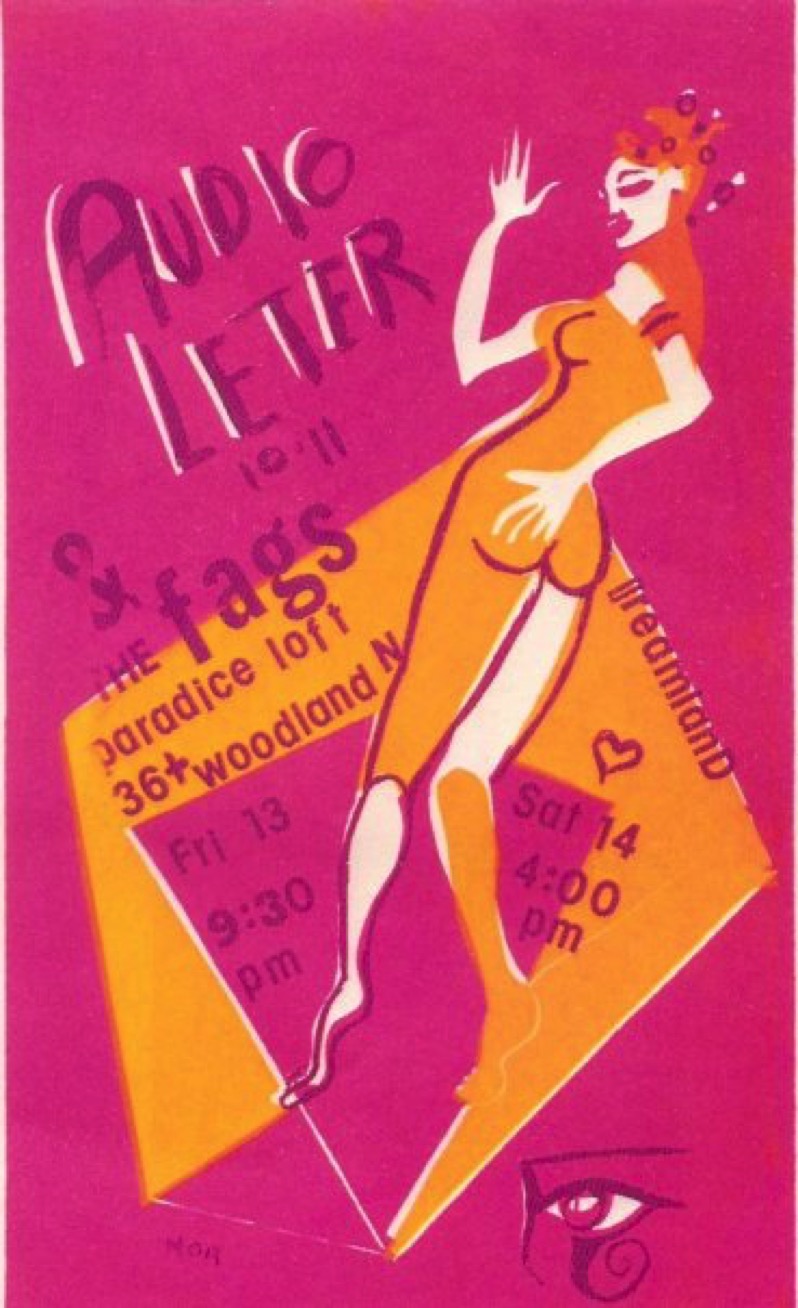 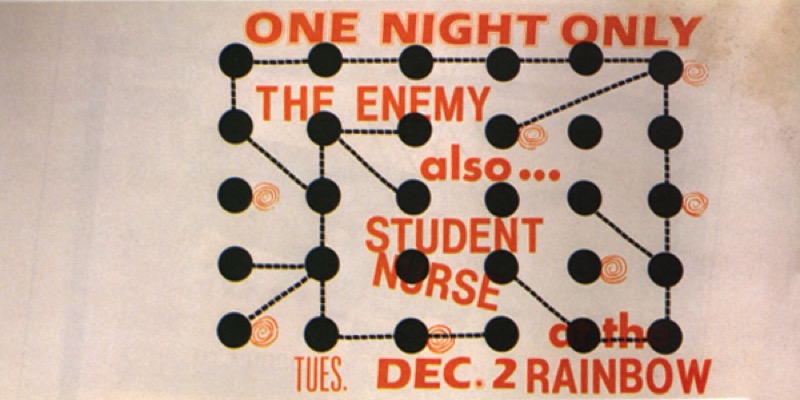 Helena silkscreened these posters by hand in limited runs.

A "silk screen" is a (usually nowadays synthetic) thin fabric with very fine holes, stretched tightly over a rigid frame. When ink is spread over the upper surface, it can be forced through the holes onto paper or the fabric of a t-shirt.

Typically, the screen has negative areas that are blocked, creating areas that don't permit the ink to get to the paper, and creating design.

Helena's process involved creating art and font layout to create a shadow. After a layout was created, a blank screen was painted with a special material that blocked all the holes.This dried overnight.

I remember running into to Helena in the basement of the University Bookstore, not long after I'd seen her band play. I recognized her immediately - she had a look - and although I was intrigued by what she was doing there, I was too shy to strike up a conversation (although 3 months later, I was in her band!) She was shopping for PRESSTYPE, a kind of expensive art-supply ready made font material. You'd buy an 8 1/2 by 11 sheet of presstype, which had as many letters of a particular font as would fit on the page, with many duplicates of the letters, epspecially the ones that are used more often in English, like e's. So you'd very carefully, one letter at a time, position the presstype page over your draft poster, and press down a pencil tip over the entire letter, and the letter would stick to the paper just where you'd put it. It was incredibly time-consuming, but it produced a polished look that was otherwise unattainable. Especially compared to cutting letters out of magazines, as popularized by kidnappers and The Sex Pistols. Tom also had a rubberstamp letter set that we  that had a certain look we liked and was reasonably easy :) But with PressType, you had to be really careful. Any mispelling using presstype, and maybe you could scrape off the bad letter using a razor blade, and maybe the whole poster wasn't ruined. Also, anybody who used PressType regularly ended up with lots of sheets where most of the letters were gone, and you just had a lot of q's and z's. Helena was particuarly fond of a font called FUTURA (I think I probably learned that were thiungs called "fonts" from her), which is why I used Futura for this website. It's still a favorite of mine.

Helena took this screen to the single bathroom in the little house she shared with John (bathrooms were often used as darkrooms). She'd lay the artwork on top of the screen, and expose the screen to 30 minutes of ultraviolet light. The the screen would go under a faucet, and any place where the UV light hit, the hole-blocking material would rinse out, leaving positive areas with holes, where the ink would come through, and negative areas of no ink.

A basic silkscreen uses 2 colors: the paper itself, and the first layer of ink. Note that many of these posters have 3 colors, so 2 different screens had to be prepared. The first printing run of 100 posters would have to dry overnight on a big rack with many thin shelves. And, in these anceint times, the only place where the final product could be previewed was in Helena's imagination. There were no computers.

By 1982, though, the garage had turned into more of a recording studio, and Helena wasn't living there anymore anyway, not to mention the entire job was laborious and time-consuming, and Xerox machines started appearing...